My good friends just moved into a new House which just happens to be located right behind the Kellogg’s factory.  There’s an old story I read when I was little about a poor man who lived upstairs above a Restaurant.  His daily rations were meager and most days, just a plain naked bowl of rice had to suffice.  He combated this by applying his imagination to project a fantasy where he wasn’t broke and hungry.  He would close his eyes and inhale all of the delicious aromas that rose upstairs to his simple dwelling and really savor his bowl of rice.  With enough imagination, it felt like he was dining on an extravagant banquet as well, filling his belly up with the many rich and delicious smells.  When the rich Patrons downstairs dined on Steak or Chicken, so would he!  Now, the Owner caught win of this and demanded to be compensated for his “loss”  He accused the Man of being a thief, seeing how he had never paid the Owner for the enjoyment of his “smells.” –LOL.  They happened to be appointed to a fair and just Judge.  His final conclusion was that the Owner of the Restaurant would be compensated for his “smells” with the sound of coins from the Man.

Every time I’ve been over since they moved in, it reminds me of this story and makes me =D That, and the entire place smells of Poptarts 24/7…no need for scented candles!  If I were the realtor, I think (just to be silly) I’d list the house as “Great amenities + FREE Smells!!!”

For actual dinner, this is what I had: 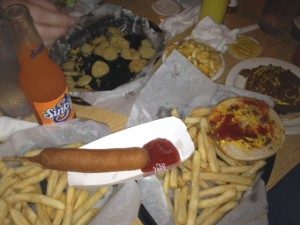 I think I ate my own weight in Fried Pickles …eek! 😉

I wish all pop came in glass bottles like this.  It always makes it seem (or at least for me) like it’s not just a beverage, but a treat (+ I really dig the no high fructose corn syrup bit).  No matter what side of the fence you’re on with that, my rule of thumb is this: I’d rather consume ingredients that I can pronounce i.e., Sugar. 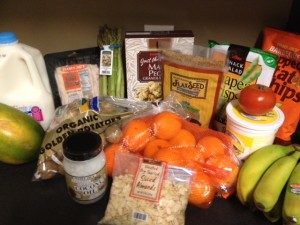 I snapped this last night and since then, I’ve polished off the Chips, 3 slices of Turkey (for lunch), Tomato, 2 Bananas, and 1/2 my Granola and Yogurt, LOL.  (I have a pretty hearty appetite for Breakfast) though if it weren’t terrible to do, I’d have Cheeseburgers, Pizza, and left over Chinese Food for Breakfast instead, haha.

Oh and just bc they’re so pretty, I wanted to share snapshots of some pretty darn adorable Cakes that I caught in the display when I ran in and out of the Asian Mart after work the other day to pick up Buckwheat Noodles: 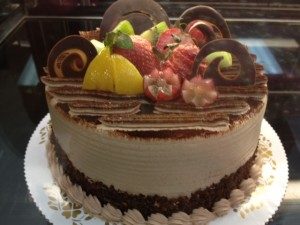 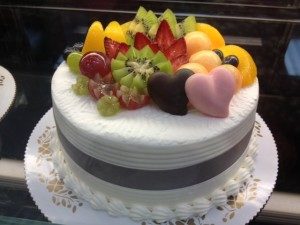 Just in case ya missed it, here’s my Buckwheat Noodle Video

How adorable are those Wavy Heart Truffles?!

Even when I’m only suppose to run in and out, leave it to Squish to get distracted by food, lol.

‹ First Giveaway! The Most Whimsical Chef I know… ›

One thought on “Food Filled Friday”