What captured my attention was the 2 x 2 box that screamed “Real Live Sea Monkeys!!!”  Crazy haired Alien Squiggles that looked like they’d be your best friend and provide you with hours of entertainment.  9 year old me fell for it.  I’ve since never purchased anything else from a Catalog or Infomercial, lol.

This weekend, it wasn’t Sea Monkey’s that disappointed.

Nowadays, I feel like new hot spots are sprouting up all over town.  Facebooker’s seem to sing the praises of this one or that or friends will positively insist that you just must go to a particular one.  Recently, I went to such a place where the it factor bled from the local Art work draped on the walls and super shiny Retro Booths.  Beyond that, I got my entire meal served to me on Styrofoam Plates, where the French Fries cost $8.  What I got were limp, sagging Fries delivered in a Styrofoam Cup, over salted and so greasy that the entire outside of my cup was slippery.

Last night, I had Chinese at this place that everyone has been raving about.  “Best General Tso’s Chicken!” said the local publication that surveys all things new and cool.  Oh General Tso…I feel like to most people, that’s what they identify as Chinese Cuisine.

I got the Spicy Crispy Shrimp for Dinner.

I almost regret not taking the “before” picture, because I promise you, it wasn’t much better than this:
Eeek, I almost feel like this is inappropriate to share because it’s just that offensive :/ 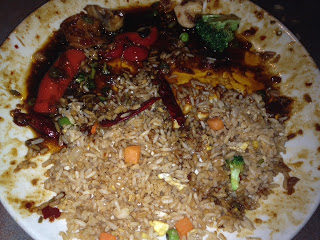 Bland Fried Rice with mushy Veggies that implied it had been sitting in a steamer all day, just waiting to be scooped up, losing patience.  Fried Baby Shrimp (that tasted strangely of Bacon) sitting in a sauce, so severely oily that it made the Shrimp soggy, not “Crispy” as it had promised.  The yellow bits above are all pools of oil–deep enough for stupid Sea Monkey’s to swim in.

Now, I take responsibility.  I had the choice not to go but I’m a firm believer that nothing good ever happens on an empty Stomach.  Also, your Mama is always right.  Never judge a book by it’s cover.  The facade of it all was so plush and elegant but the food derails you to a dirty place.  I had been so busy that day that it was a “stupid Granola bar has to suffice right now” kind of day that I scarfed the whole thing down before I even noticed.  This was neither Spicy, Crispy, Shrimp (more like firm, deep fried Bacon bits), or Chinese.  This was an off brand T.V. Dinner, badly impersonating an actual Meal served at a nice sit down Restaurant.

I suppose I’m odd in the fact that I get impacted by my food experiences.  The rest of the night left me with an awful taste in my mouth.  You know how when you’ve eaten something terribly yucky, a fuzzy film of Nausea sticks to you and won’t loosen it’s grip and travels down to the pit of your Stomach and makes you feel queasy and uneasy?

Needless to say, my main goal for the weekend now is to find something yummy for Dinner.

That was my soap box moment, lol.  I just had to tell somebody!!

I hope that everyone else has had a delicious weekend so far!