If you’re anything like me, according to (yourself), Mom is the best.cook.ever.  I think it has something to do with the eternal connection you feel to your Mother as her Child.  It’s food she cooked with her hands to feed you.  There’s something in Korean called ‘손맛’ which literally means ‘hand taste,’ meaning, whoever prepares the food melts deliciousness into it with their hands.  I think it has something to do with the fact that with Korean Food, effectually everything is mixed by hand.  For me, there’s something almost internal and intimate that blooms each time I sit before a gigantic bowl of wilted Napa Cabbage to smash together into those familiar ruby leaves, snugly pressed together.  It’s by doing it that I realize that my Korean Ancestors have all done the same before me.  It’s something that just cannot be achieved via mechanical methods.  It’s something that requires ‘손맛!’  Mama rarely has leisurely, unfilled time to step into the Kitchen and work her magic so when she does, it’s well, it’s MAGICAL!

Somehow she must have sensed my terrible dining experience from the night before (she did not), and called to tell me that she had prepared dinner.  Dinner is one of those daily events in life that I most look forward to.  It’s like my reward for the days work, lol. 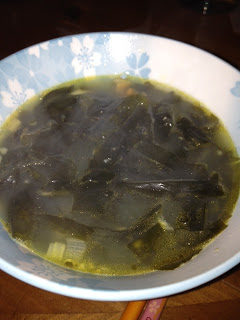 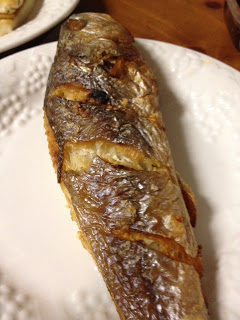 I think this is Mullet 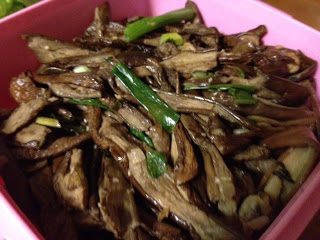 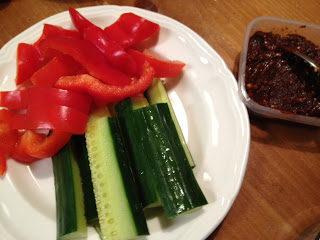 These are the types of meals that I can remember eating when Mama had the time to cook when we were little.  At home (and most Korean households), there is always Rice, Fish, Veggies, a Hot Soup, and Kimchi.  (We also had Rice and Kimchi, both not pictured).

They’re special to me because of Mama’s ‘Hand Taste,’ LOL