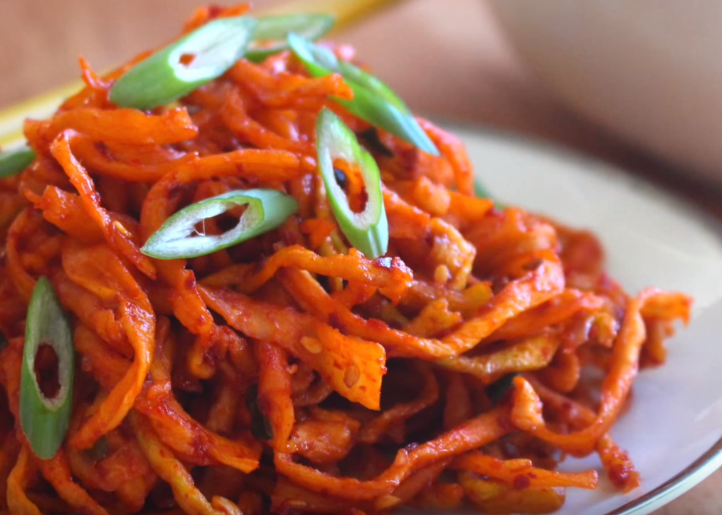 There’s nothing quite like the magical Korean radish in my book.  It truly possesses transformative powers with its capacity to be bright and fruity at one moment then chewy and crisp the next.  There are actually several dozen ways to prepare Korean radish.  My father even enjoys them straight and raw.  It’s a testament to how crunchy and refreshing they are.  Though they appear to be daikon, Korean radish {or mu} is much more juicy with a denser flesh, mild spice and a subtle sweet flavor.  The Autumn and Winter harvests are the most prized and thought to be the most delicious.  Needless to say, I felt blessed to be the lucky recipient of more than 50 pounds over the weekend from my wonderful Gomo/Auntie.

Today, we’re going to be focusing on 3 different Korean radish recipes with radish kimchi, danmuji-pickles and muchim/side dish.  Each has its own purpose, touting unique flavors and textures.  Though it’s hard to choose, I’d say the dried radish muchim or side dish/banchan is my favorite.  Known as “mumallengi muchim,” it’s delightfully chewy with a nice crunch.  Despite its fiery ruby color, it’s not that spicy and the drying process actually intensifies its natural sweetness.  When it’s later paired with honey, it’s mild in the heat department with an exciting textural element.  The radish kimchi is a staple in Korean cuisine just like napa cabbage kimchi, accompanying many {or all} traditional soups and stews.  As cooler air yields to a bounty of Korean radish, it’s only fitting for it to pair perfectly with bubbling broths of all sorts, particularly the ox-bone soup/seolleongtang.  You could even feature it as the star in beef and radish soup.  Finally, the danmuji/pickles are crunchy and sweet, having its place in Korean sushi-type rolls called kim-bap or as a side to jajangmyeon.  It’s also great as a pickled condiment to heavier items like fried chicken.  I have fond memories of enjoying sweet and spicy fried chicken in Korea alongside tiny tubs of danmuji/pickles.  It’s a classic!

Whichever recipe you decide to try first, you really can’t go wrong.  They’re all so different and delicious.