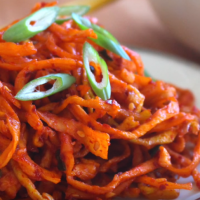 There’s nothing quite like the magical Korean radish in my book.  It truly possesses transformative powers with its capacity to be bright and fruity at one moment then chewy and crisp the next.  There are actually several dozen ways to prepare Korean radish.  My father even enjoys them straight and raw.  It’s a testament to..read more