It wasn’t until this year that I began experimenting with making my own jerky at home. After the first couple of batches, I realized how easy it is to make. Also, I’m perpetually hungry so I always have a snack nearby and jerky is great because it’s light weight, a great source of protein, and..read more 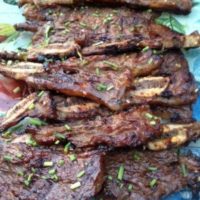 Deeply marinated Korean BBQ ribs are my favorite meat dish of all time. These are so flavorful and juicy, you’ll require them at your next BBQ! Galbi is my favorite type of Korean barbecue.  I think it’s something primal about enjoying meat off the bone {which also imparts a richer flavor}.  I find that it’s..read more