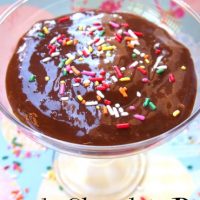 Sometimes, it’s the simple things in life that are the best.  Take this pudding for example.  It doesn’t require nearly as much effort as other desserts but the reward is immense in the fact that you can sit and pretend like you don’t have a care in the world…like when you were 7 and snack..read more