What I Eat In a Vegan Day 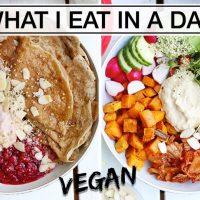 As I mentioned in this video, you guys have inspired me to really look into veganism by bringing it to my attention on my channel, blog and social media, asking me about vegan  ingredient swaps or how to veganize some of my existing recipes.  You guys shared your testimonials with me on how it’s changed..read more