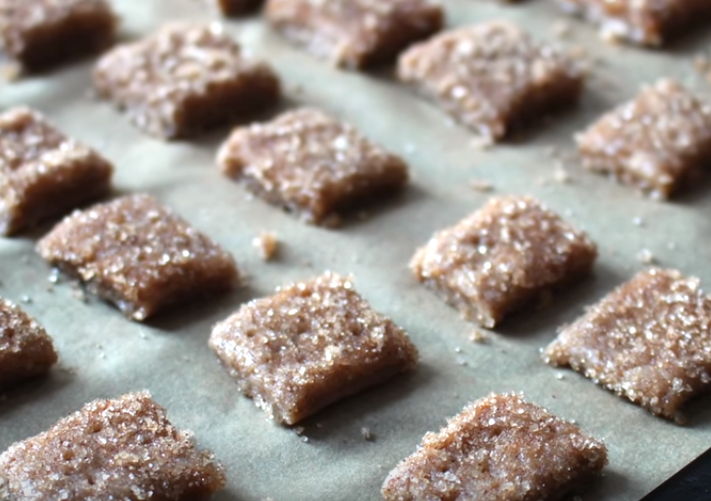 Growing up, cinnamon toast crunch was an ever present staple in our pantry along with the complete arsenal of sugar-crusted cereals including pop tart crunch, remember those?  These dazzling cinnamon swirl squares immediately transport me back to hectic mornings where the entire family is knocking into each other sharing one bathroom and my baby brothers are throwing things in my hair and everything is at a frantic pace because kids got up late and parents have to get to work but 3 little ones in tow is a job in itself.  If it weren’t for those trusty boxes to shovel in some fuel, be it a sugar based one I doubt we could’ve invested any more thought into breakfast.

Today of course, is a different story.  We’re all grown up now and as a family, we absolutely love to linger over thoughtful meals.  Cinnamon toast crunch is now more reserved for treats …or dessert.  Better still is the idea of a homemade version that I’ve tweaked to grow up with me.  It’s still packed with both nostalgia and cinnamon sugar but I can feel better about enjoying ingredients I can pronounce and finding pleasure in tucking into a bowl of fresh, still-warm-from-the-oven cereal that’s light, crisp and only gently sweet without going overboard.

To make this homemade cinnamon toast crunch, you only need a handful of ingredients, most of which you probably already have and the hardest part is cutting them into squares.  The dough is easy to work with and comes together nicely before you roll it out {the aid of wax/parchment really helps to expedite the process}, slice and bake.  Since you’re making your own, you can really be creative by cutting out silly shapes, particularly fun to do for kids.  You could also toss in a bit of cocoa for a chocolate cinnamon toast crunch {mexican hot chocolate, anyone?} or maybe even a bit of almond, apples and nutmeg or even honey and bananas.  The options are seriously unlimited.  I have to say the best part is how it makes your house smell.  It’ll seem like you’ve been slaving away for hours when you haven’t.  Your entire family can wake up to the wonderful warming scent of cinnamon sugar and that paired along with the novelty of homemade cereal will certainly make for an incredible Saturday morning.