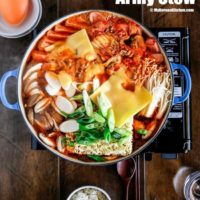 Called “boo-deh ji-geh,” this stew is perfect for cold days when you want something hot but quick.  It’s essentially a “leftovers soup” and was traditionally served by the peasants in Korea from what they could gather at US Army bases, hence the name.  Though, this soup doesn’t play as necessary of a role as it..read more