This is exactly what it feels like when either Baby Brother comes into town.  Unfortunately, Daniel is now getting settled into another Country so this time, it was just a party for two 🙁 …even if the quantity of food indicated otherwise.

I was just able to Skype with Daniel on my phone today and call me a dufus or what have you- but for me, it’s as if Skype were invented yesterday and I’m finding it to be ammmmazing.  I’m talking to him from the Netherlands!!!  He looks so happy and well fed.  (or maybe to me, he looks well fed therefore he IS happy, lol).  Either way, I’m so glad he seems to be adjusting well.  I just need to figure out how to school Mom on using it-bless her heart =D 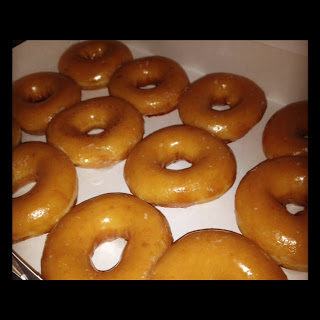 BAM!  HOT Krispy Kreme Doughnuts–yea, I just did that.  Don’t hate me 😉 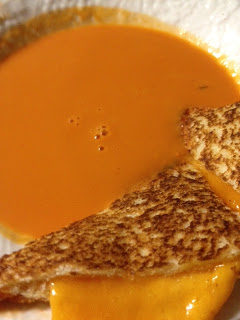 Grilled Cheese & Tomato Soup bc he and I are two of a kind too =D …totally lame but true! 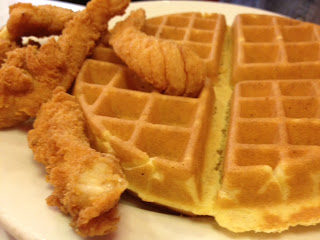 Chicken & Waffles?  The picture says it all–ok–maybe mediocre at best.  This was the second place I’ve gone to this month bc people have been insisting I go.  I think I’ll be listening to myself from now on.  I think often times, people are thrilled by the decor and ambiance and don’t take into account that they just shoveled over a bunch of money for it and didn’t even get a decent plate.  David made it better by making it his own with Sausage Gravy—crazy, I know but delicious! 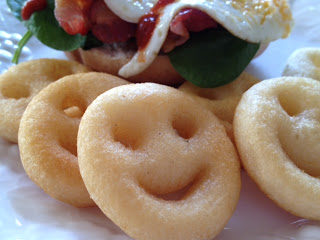 Smiley Fries may perhaps very well be the most ridiculous inventions ever but I so appreciate them for what they are.  They’re silly things meant to make you happy…and it doesn’t suck that they’re crispy Mashed Potatoes either. 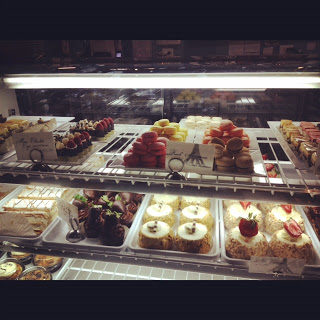 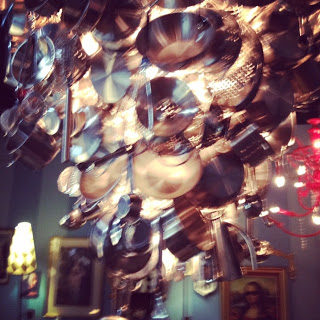 The entrance to the Bake Shop. 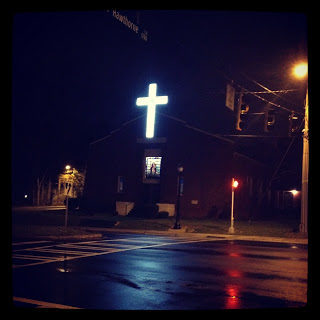 The Pic I snapped right before we arrived at the Bar.  Which brings me to a point…I can’t remember the last time I even went to a bar, or club for that matter!  geez. 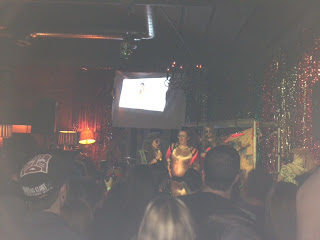 We went to grab a late snack and Mr. Teddy (in a very lethargic manner) said “weeeelcome” LOL 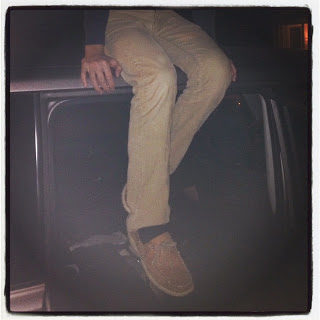 My beautiful Baby with legs that continue a mile on.

This little boy–no scratch that–young man always brings back him with such exuberance and inspiration from wherever he just last came from.  I could learn a thing or two from such a fresh perspective, and I do.  There is no one in this world like my two Baby Brothers.  We can simultaneously laugh so hard to end up snorting or coughing up bits of food while delving into deep philosophical conversation.   It’s funny bc I see so much of myself in them.  We are strange and beautiful pieces of Mom and Dad in 3 separate and individual personalities, yet when David and I were talking this weekend during just one of our conversations that lasted until 4 am, I found myself smiling inside from how familiar the echo sounded from what he was feeling and how he was internalizing such and such.  I actually considered blogging last night but upon realizing that it was the 4th night straight of heading to bed at such a bizarre hour, I decided against it and felt that sleep was tempting me with her lulling ways 😉  That’s another thing that David had me realize.  Just a few years ago even, I didn’t feel that 4 am was a bizarre hour for anything.  The saying is that “nothing good happens after 2 am” –gee, thanks how I met your mother– but when I was young-er (don’t throw anything at me bc I KNOW I’m not old), fantastical things would occur late into the night.  The thing that was highlighted in crazy-bold-undeniable-neon-colors this weekend was the utter rejection of reckless abandonment that I’ve been honing since the arrival of my mid-20’s.  Oh where have you gone girl with stupid bleached hair that hopped into a car not caring where it took her to–the girl that couldn’t contain herself just for the fact that it was indeed, a Friday night–the girl that would drop everything if ever she heard the word dare.  David firmly believes that coolness is a factor that shall forever remain sewn to his side.  I know looooots of cool 30-40-hell, even 60 somethings but it’s always been tempered by the fact that a job then replaces sleeping in past 3 and dictates that one must haul himself to bed before a crazy hour, and somehow–just somefreakinghow, baby bumps become the newest accessory and retarded doilies are the hottest thing on the market–not that cute boy.  Now, I realize that maybe a fraction, a portion, a bit of all of this may be exaggerated, but not grossly!  I’m talking about total, utter reckless abandonment here people!  Most 16 year old’s have it and I guess 19 year old’s have a lot of it too.  My “wonder years” of shamelessly flirting, hiking up my skirt, and dancing the night away seem much too abbreviated and I tell David this: before you know it, you’ll have a stupid job, stupid commitments and obligations, stupid mortgage, stupid car payments…to that David retorted, “There’s something to be said about being young and broke.”  There is a certain charm, a romance that one may very well reflect back on fondly.  I’m happy to report that David is wildly enjoying his youth and that yes, I refuse to identify with the survey that found that women feel that they’re past their prime at 29 (I found it in Ladies Home Journal–Avalon Funeral Plans England–ivilliage).  After all, I’m only 26 and have a ways to go =D

Eternally Optimistic, even if not Youthful,

‹ Brownies with Irish Cream Takin’ it back Old School ›