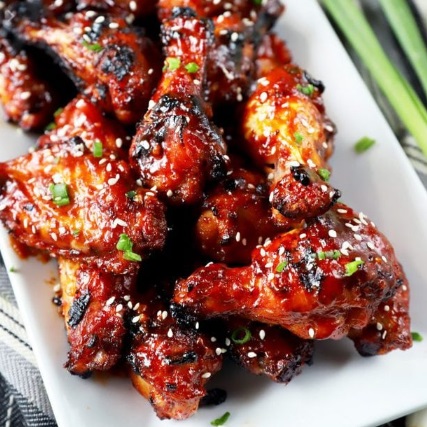 Koreans are really big on both barbecue and crispy chicken wings so it only felt natural to marry the two.  Today’s recipe feature baked wings that despite never touching a fryer, come out juicy and crisp.  They get glazed in a syrupy Korean barbecue sauce that is savory, salty, sweet and delicious.  The sauce is simple and versatile.  You can use it as a dipping sauce, apply it to more traditional recipes as a marinade for galbi or even in special ways like for Korean bbq jerky. It’s safe to say, if you enjoy Korean barbecue and crispy wings, this is the recipe for you.

The secret lies in the 2-step method for achieving a bronzed and crunchy exterior while preserving the juicy tender meat interior.  Be mindful not to overcook these guys since the broil method can go from crisp to blackened if you’re not careful.  Other than that, it’s an easy recipe that doesn’t involve bubbling cauldrons of oil or makes your entire home smell like a fryer.  Clean up is minimal and if you’re like me, you can enjoy ripping-and-dipping with the leftover sauce which also makes a great marinade for chicken later, if you so please.